The New Zealanders are in a bit of a bind. They have obviously had a terrible tragedy with the mosque shooting in Christchurch. Their position is slightly unusual; around the world, it is more often been the Muslims who have perpetrated these massacres. On this occasion, it was a right-wing nutter. The Prime Minister, Jacinda Ardern, has promised to make provision for the families of those who were killed. She said:

it is not her money, of course, but it is her gesture. As was her action in wearing a hijab to show solidarity with the victims.

The Price of Berlin Rules

Being out of the EU is (to my mind) obviously a good thing for trade and commerce, but it is not necessarily a guarantee that everything in the garden is rosy. Cars, for example, are ludicrously expensive here in Australia. Some years ago, I bought a Jaguar for my wife (now ex wife). At prevailing exchange rates, it cost about double what the same car would have cost in the UK, and about three times what it would have cost in the USA. It was probably a dumb purchase: she promptly left me, married a university lecturer and traded the Jaguar in for a Volkswagen.

Likewise books. When I looked the other day, the paperback edition of Berlin Rules costs £9 something in the UK, but $36 (that’s about £24) here in Australia. The Fenwick family originated in Northumberland, but the Elliott family originated in Scotland, and I might still have some Scottish blood in my veins, because I baulk at paying over twice the price for the same thing.

A Lesson from History 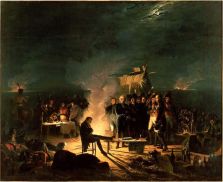 Whilst the powers that be are deciding what to do with the mop-up from the IS Caliphate, they might bear in mind what happened in Europe around 200 years ago.

Having killed around 5 million people, the French proto-fascists were defeated in 1812. Napoleon, instead of being executed or locked up securely, was sent to Elba, Within some 3 years, he was back, and very nearly succeeded in subjugating Europe (including the UK) again in 1815. Happily, Lord Wellington and his German allies prevailed at Waterloo, but it was a close run thing.

Letting the Caliphate warriors free to reform is really not END_OF_DOCUMENT_TOKEN_TO_BE_REPLACED

Rise Up and Smear First

I do not know if the Labour Party in the UK is really rife with anti-Semitism. The issues are obscure. But it is pretty clear, I think, that this obscurity derives from a couple of causes.

First, it is a proxy war, being fought within the Labour Party, between the social democrats who held sway under Tony Blair and Gordon Brown, and the new wave of Momentum socialists who have had considerable success recently in taking over control of the party. The Momentum socialists are, for now, sandwiched between the majority of Labour Party MPs, who are essentially social democrats, and Labour voters who are not, on the whole, rabid socialists either. But the way the Labour Party works these days is that it is the party membership, and particularly the activists in the party, who call the shots. And so the social democrats have been looking for a way to discredit the Momentum socialists, and calling them anti-Semitic is one way of doing this. There is no need for the to be any truth in the charge for it to be effective, as long as there is a kernel of truth in there somewhere, and as long as at least some of the mud sticks. And it is not easy to separate facts from rhetorical allegations in the midst of such proxy warfare.

Secondly, for a lot of people (many, but by no means all of them, Jews) any criticism of the state of Israel is automatically treated as anti-Semitic. It is a good trick, if you can get away with it. But there is a problem. Quite a substantial problem. On any independent analysis all, it has to be concluded that END_OF_DOCUMENT_TOKEN_TO_BE_REPLACED

This is a rather-self satisfied quiz question, I admit.

In which of these aircraft did I spend a very happy 3 hours yesterday afternoon?

Hint: It will do 150 knots. I know that because while flying it I was allowed to put it into a dive. A bit childish, perhaps, but END_OF_DOCUMENT_TOKEN_TO_BE_REPLACED