It is hardly surprising news that the wind farm business in Europe is riddled with corruption, because the public money thrown at them it is essentially based on deception; certainly, the governments who have been pushing the warmist agenda have no great interest in any revealing of what is actually going on with the taxpayers’ money that they provide in subsidies.  And this of course is perfect breeding ground for crime for organised crime.

In Italy, the organised crime is run by the mafia, and the Italian police gamely plug away at the task of trying to rein the mafia in. They have just seized the wind farm assets of a Sicilian gentleman, Vito Nicastri – some €1.3 billion according to Corriere della sera – who is alleged to perform laundry services for the mafia.

There are those who suggest that the endemic crime still rampant in Sicily can be traced back 2000 years to Roman times, when the Romans destroyed the local political structure in order to run the island as a huge wheat farm, effectively enslaved to the interests of the state.  So thoroughly were the personal liberties of the citizenry subjugated to Rome that the political health of the island has never recovered. It is hard to imagine that political damage can last that long, but perhaps it does.

How long, one wonders, will the political damage done by the warmists last? Probably quite a while, not least because so many children around the world have been indoctrinated with pervasive nonsense about the environment.  Hopefully not 2000 years. Communism – always a load of tosh – lasted for about 100 years; maybe that is roughly how long it will take before Big Wind is finally blown out?

Meanwhile, Anthony Watts of Watts Up With That has installed another bigger better solar panel system on his house roof in California.  This is not because his scepticism about the climate change thing has been dented, but rather because he is convinced that the Californian government is potty, and will drive electricity prices up so high that even a weave-your-own-knickers solar system will be cheaper than buying from the grid. He is probably right.

Meanwhile, the Brits has just given the go ahead for a new nuclear power station, which is welcome.  The Goddard Institute has just published a paper showing that nuclear power is much safer than other available sources; they put the number of lives saved in the world so far by nuclear power at 1.8 million. All these sorts of figures need to be taken with a huge grain of salt.

Similarly, there are massively divergent estimates of the comparative cost of various of the alternative ways of producing powers. According to Nuclear Fissionary, nuclear is cheaper than everything else except hydro. But then again, the Greens would tell you something else quite different. So how to get to the truth?  Well, one way is to compare the actual cost of electricity in places where they use nuclear power with those that do not. France is the stand out, for it produces some 70% of its power from nuclear power stations, but also sells power to neighbouring countries that do not, so it is not a watertight measure. Still, let’s have a look.  According the EU figures, the cost of electricity in France is among the lowest in Europe, leaving aside countries like Bulgaria where wages across the board are very low. 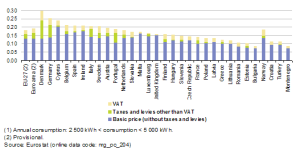 The picture from the USA is more complex.  The US is the world’s biggest producer of nuclear power in the world, with over 100 nuclear power plants.  But they also burn a lot of coal. Overall, power is cheap in the good old You Nigh Stays, but a difference has already opened up between the seaboard states (generally Democrat) and the central states (generally Republican); according to U.S. Energy Information Administration, the figures are as follows: 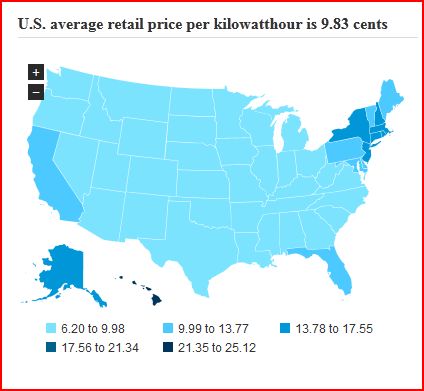 All of which goes to explain why, all those years ago, Margaret Thatcher was demanding reports which slammed coal (she was promoting nuclear, of course, not so much because of its environmental advantages, but because she wanted to defeat the National Union of Mineworkers), and why today Anthony Watts has a nice new solar system on his roof.