I was not worried too much about her being able to swim, but I was keen that she should know where the steps are, so that she could get out of the pool if she fell in. So she had her first swimming lesson on Day 1. 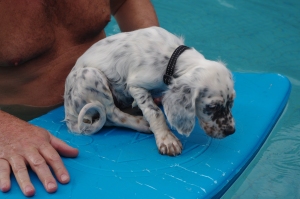 Day 2 and she was helping me feed the fish in the goldfish pond. Eager to see the babies this year, she got too close and fell in.  So she had to go into the pool to clean off. Ten minutes later, she thought it would be fun to see if she could run round the edge of the fish pond without falling in. She couldn’t. Back in the pool to clean off.

r or so later, when I was swimming in the pool, she thought she’d try jumping on my head for a ride. She promptly fell off, of course. Later in the day, she also managed to fall into the spa, where there are no steps (until I though it safer to put some in). 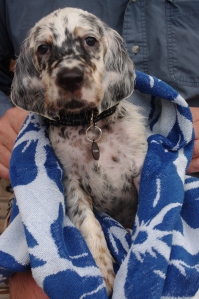 So she spent a fair bit of the day being dried off.

Day 3 now. Bit tired after all the excitement. She is spending the morning dozing on Cricket’s old bean bag under my desk.

Filed under News from at home