T S Eliot thought the naming of cats was a sophisticated business. 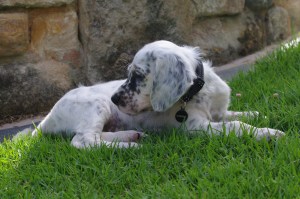 How much harder to find a name fitting for the new love of one’s life? She arrived last night from Queensland. Not sure that either Phoenix Snowfall or Mrs Shrimpton is right for her after all, having met her.  She got in at 10.30 pm last night, and I when she got home, I played with her and showed her  around for about an hour, thinking that by then – having had a long day including a 2 hour flight – she would be sleepy.  Oh no!  She did not think that bedtime applied to her, and even managed to get the police around to the house at 12.30 am (someone evidently thought we were torturing her).  The police agreed with my view that there are worse things for a dog than having to go to bed on a nice new doggy bed in the boot room come midnight, and shortly after that she settled down.

In the end, of course, the children will probably decide on her name.

Filed under News from at home

4 responses to “Name this dog”