I have been pretty much lazing around this weekend.  Jeanie and the children are away for a few days, I have a lingering cold and my physician told me last week that I am suffering from poly fibromyalgia, which appears to be a fancy way of saying that I ache all over (I could have told him that.  In fact, I did tell him that.  He told me to rest).  So I have been sleeping and waking up at any time of day or night, feeding off Scotch eggs and Turkish Delight, wandering around the house in whatever dress or undress I choose, reading rubbishy books on my Kindle and watching some TV.  It has been rather cheering. 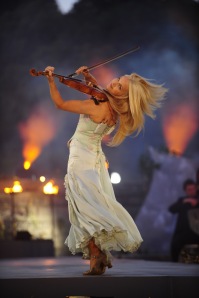 And on SBS TV this afternoon, right after the Al Jezeera news (which I watch now; it is rather good) was the most appallingly vulgar thing I have ever seen in my whole life.  It consisted of a handful of Irish birds in ball gowns skipping around on a twilight stage in front of Powerscourt House, Co Wicklow, belting out slushy pop songs and playing the fiddle. The lyrics involved quite a bit of Irish nationalist twaddle, and quite a bit of more neutrally-international twaddle:

The whole spectacle was lit by umpteen flares and blue lights, with oodles of smoke effects and fireworks for dessert. The girls call themselves Celtic Woman (I think they mean Celtic Women – grammar never was a strong suit for the Irish) and they had a big backing band, including a phalanx of bulky men with ponytails and little black sleeveless jerkin efforts, with warpaint on their arms, whacking the bejezus out of a collection of Irish tom-toms and tambourines.

Powercourt House – a huge Palladian pile – was a slightly odd choice of venue for an Irish music celebration, since it is something of a symbol of English domination in Ireland; it was the gift of James I to General Sir Richard Wingfield (who was from Suffolk) for successfully quelling a rebellion of Iocal Irish chiefs in the county of Wicklow in 1603, and for 3 ½ centuries stood as a centre of Anglo-Irish Protestant landowners.  Just as weirdly, the event involved Scottish pipers, as if the hundreds of years’ of conflict between the Scots and the Irish in Ulster had never happened. 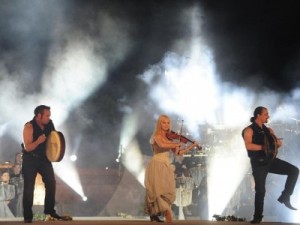 One response to “Celtic Woman (sic)”